This page recounts the story of George Julian Harney’s short-lived Friend of the People, and reproduces some snippets from its pages. It sets out Harney’s plan to relaunch the paper and lists the members of its general committee. 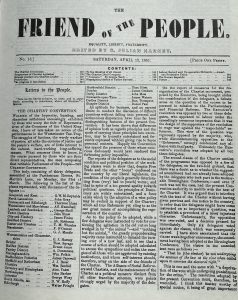 George Julian Harney’s attempt to publish an explicitly revolutionary journal under the name the Red Republican foundered after less than six months in the second half of 1850.

With booksellers and stationers reluctant to sell it, in part because of its inflammatory title, Harney changed his paper’s name to The Friend of the People. Under this name – reflecting Harney’s long-established pen-name L’ami du Peuple – it ran on for a further 18 months before failing due to lack of support.

Meanwhile, Ernest Jones had emerged from prison to claim his place at the head of the Chartist movement, the left of which under Harney had now split from the increasingly erratic Feargus O’Connor. At first, the alliance of Harney and Jones appeared strong, despite differences over the emerging co-operative movement and other issues.

By April 1851 plans were well in hand for Harney’s paper to be relaunched under the joint editorship of the two men and as a “stamped” publication. A “general committee” consisting of “friends” of the proposed new paper was established, and its prospectus was outlined in the pages of The Friend of the People . Though not explicitly stated, one aim of the paper was to act as a counterbalance and alternative to O’Connor’s Northern Star .

For a number of weeks, further notices and information appeared, indicating that the new paper would appear that June. But the launch date came and went, and by the middle of that month all mention of the project had ceased. In his History of the Chartist Movement 1837-1854 , R G Gammage claimed that fundraising efforts produced just £22 after expenses, and that the project was dropped for that reason.

At the same time, Jones had launched his own publication, Notes to the People , a more thoughtful and theoretical journal than the newspaper that had been envisaged. But it was clear by then that what remained of the Chartist movement was in disarray. A national convention called by the Manchester Chartists, who favoured closer alliance with middle class reformers, was supported by O’Connor but disowned by Harney and Jones, who in turn convened their own London convention.

In due course, however, Jones and Harney were to fall out over the make-up of the National Charter Association’s increasingly powerless executive. Harney withdrew, and Jones first suggested and then executed a coup, establishing his own three-man body in its place.

Chartism was now, in effect, too small and too fragmented to sustain a substantial weekly publication. In one of the final issues of his unstamped paper, Harney admitted that, not only had the publication “never returned one penny for my labour”, but that, “for some time past, the Friend has been published at a loss of from thirty shillings to three pounds weekly”. The final issue of The Friend of the People made its appearance on 26 July 1851.

The prospectus and list of general committee members for the proposed new publication set out below is taken from The Friend of the People for Saturday 14 June 1851.

PROSPECTUS OF A NEW WEEKLY DEMOCRATIC JOURNAL TO BE ENTITLED

FRIEND OF THE PEOPLE

Ideas propounded, discussed, accepted – behold the only enduring foundation on which Revolutions in Government and Society can be securely based. The most glorious struggles to destroy oppression have resulted either in total failure, bitter disappointment or fearful reaction, because the long-suffering millions have lacked the knowledge necessary to enable them to distinguish between preteneded and real reforms – between their true friends and those political charlatans who, masquerading in the guise of liberalism, traffic in the misplaced confidence of the people.

The advocates of Democratic Reform and Social Regeneration, can hope for real and permanent success only through the general adoption of their principles. To expound and propagate those principles, democratic journals must be multiplied. THE PRESS – that great engine of Moral Power – must be employed more effectively than hitherto it has been, to spread aborad the all-saving truths of Democracy. Theories of political and social justice will be transformed into practical realities, the moment the great mass of the people are imbued with a correct knowledge of their rights and are made to comprehend the means by which they may work out their own emancipation.

Impressed with the views indicated, rather than fully set forth, int the foregoing observations, we whose names are hereunto subscribed, have advised JULIAN HARNEY and ERNEST JONES to respond to the many appeals made to them from all parts of the country to combine their energies for the production of a journal calculated to elevate and advance the people’s cause. Having constituted ourselves a Committee to aid them in this enterprise, we have the pleasure of announcing that –
A NEW WEEKLY NEWSPAPER OF LARGE SIZE, TO BE ENTITLED THE
FRIEND OF THE PEOPLE
Edited by Julian Harney and Ernest Jones,
Will be published immediately adequate support is guaranteed by the local committees at present formed, and in the course of formation.

The elaborate details usually set forth in a Prospectus may very well be dispensed with in the present instance. The title of the projected journal has already the significance of a banner; and the names of the Editors afford a sure guarantee that its columns will be devoted to the exposition and advocacy of uncompromising Democracy, and the Social Rights of the Millions. Without, therefore, entering into minute particulars, it will be sufficient to state that the FRIEND OF THE PEOPLE will include in its leading features the following:-
I. CHARTIST ORGANISATION AND PROGRESS, under which head will be given a fill and impartial account of all Chartist proceedings, together with original papers elucidating and vindicating the principles of the Charter, on the ground both of right and utility. The substitution of the democratic principle of popular election, in place of hereditary and class usurpation in connection with governmental arrangements will be strenuously advocated.
II. SOCIAL RIGHTS. National proprietorship in the soil will be unceasingly contended for and familiarly popularised. The natural right to labour, and the consequent means of facilitating the exchanges of products, will find THE FRIEND OF THE PEOPLE a ready and fearless advocate.
III. CO-OPERATIVE PROGRESS AND ASSOCIATIVE LABOUR, important phases of the age, will be earnestly advocated. Co-operative and Industrial Associations, Trades Unions &c will find the proposed journal a faithful organ of their principles and proceedings.
IV. EUROPEAN AND AMERICAN DEMOCRACY.–To afford a correct representation of the movements of the Democrats of Continental Europe and America, will be one of the primary objects of the Friend of the People . Original sources of intelligence being at the command of the Editors, they will be enabled to give full and correct information of the aims and struggles of the Republicans, Socialists, Agrarian Reformers, and Communists of Europe and the United States. Lastly it is intended to make the projected journal a medium of intercommunication between the Democratic and Social Reformers of all countries.

Due space will be allotted to LITERATURE and the FINE ARTS. In conjunction with the useful and instructive, the romantic and entertaining will not be lost sight of.

Besides developing the above-mentioned features, the FRIEND OF THE PEOPLE will be a complete news -paper, and will contain reports of the debates in Parliament, Public Meetings, &c, also Legal, Police, Mercantile, and general intelligence.

“Quack Advertisements” and other offensive matter to be found in nearly every existing journal will be rigorously excluded from the columns of the Friend of the People .

It will be the aim of the Editors — in all departments of the projected journal — to elevate Democracy to a standard commensurate with the dignity of its principles. In fine, to produce a journal which will command the support of friends, and the respoect of foes — a journal that every democrat may dare to shew to men of opposing parties and classes, and say:- “This is an organ of our movement, a reflex of our mind, a representative of our principles, the harbinger of our triumphant future.”

From the pages of the Friend of the People

THE CHARTIST CONCERTS
Citizen Editor. — Having attended the concert at John Street, Tottenham Court Road on Tuesday evening last, I beg to state that after the anthem was sung, “Save our Native Land,” there was a loud call by the audience for the “Marseillaise Hymn,” which was not responded to by the choir, for this reason, said R Y Holyoake, the conductor. “It would interfere with politics which we desire to avoid.” Is not that hypocrisy, when the orchestra was decorated with the Red and Tricoloured banners with political devices thereon, and the front of the platform lined with red cloth, typical of the “Democratique et Socialle” flag? The concert itself was a political one, being expressly for the benefit of the Chartist fund. If you attend at the theatres, concerts and other places of amusement in London, you will find the band either commence or conclude by “striking up” “God save the Queen.” Is not that political? Whenever it is encored by the audiences, it is immediately responded to, without consulting the feelings of any democrat who might happen to be present. At Jullien’s concerts, which took place at Drury Lane Theatre some time ago, you would get your HAT SMASHED IN if you did not pull it off the very moment the band began to play the so-called “National Anthem.” And are we then, the Socialists and Red Republicans, to be deprived of our anthem, when called for, because afraid of giving umbrage to a few respectable toadies who might happen to stray into our concerts? I am yours fraternally,
J W Sugg
New-road, London
31 May 1851

EMIGRATION:- THE LAND! THE LAND!!
To the working classes and others. In consequence of the immense success that has attended the societies instituted by Mr D W Ruffey, a few friends have joined with him in a Society for the purpose of Emigration and general Colonisation. They propose to issue 5,000 Shares, of One Pound each; deposit, 2s 6d a Share; calls 2s 6d per month.
The following eligible investment is now offered: a FREEHOLD ESTATE in Eastern Canada, comprising 20,000 Acreds of Land. within 17 miles of a market town and the Port of St Francis, from which Steamers ply Daily to Montreal and Quebec. The River Medlet, and the River Becaucour, runs through the Estate, and are navigable for boats and floating timber down the St Lawrence. This estate presents as much as 20 miles of frontage to these rivers, with several mill sites &c.
The Land, which is of a fiar average quality abounds with timber, which, on being disposed of, it is considered will more than pay the price required for the land.
The benefit that will accrue to the Shareholder is immense, as the estate may be disposed of at a profit of 50 per cent, others purchased, colonised, and lots retained for the benefit of the Shareholders.
For further particulars, description, &c, apply by letter enclosing two postage stamps to D W Ruffey, 13 Tottenham Court Road, New Road, St Pancras, London. No time must be lost, as the first deposit to secure the Estate must be paid in a short time.
12 July 1851

PERSONS VISITING LONDON can be ACCOMMODATED with a BED-ROOM, which may be also used as a Sitting-Room, suitable for a Married Couple or one or two Single Men. The situation is within Five Minutes’ walk of the British Museum, half-an-hour’s walk of the GREAT EXHIBITION, and within a short distance of the principal thoroughfares and public buildings of the Metropolis.
Terms very moderate. For further particulars, apply to Mr Shirrets, 4, Brunswick-row, Queen’s-square, Bloomsbury.
26 July 1851

Members of the General Committee of the Friend of the People