This page provides a statistical breakdown of some of the main themes and individuals reported by the Northern Star between 1838 and 1852.

The Northern Star was the only Chartist newspaper to run throughout the main period of Chartist activity. Launched in November 1837, and only narrowly missing the drawing up of the Charter itself, the paper continued until December 1852, when the fifth and final Chartist petition was presented to Parliament.

But what – and who – did the paper write about? With several versions of the Northern Star online, it is possible to carry out some statistical analysis of the themes which filled the paper’s pages over 15 years.

The data on this page is based on search results from the 19th Century British Library Newspapers edition, digitised and published online by the British Library and Gale.

Although this approach can provide some insight into the preoccuptions and changing interests of the Northern Star, it is important to be cautious in using the data published here. The figures are inevitably a crude measure of the Northern Star’s interests. Some of the limitations are that:

Furthermore, the simple discovery of a particular word or phrase in an article gives no indication of whether it appears in a positive or negative context, to be praised or condemned.

With those caveats, the results do show some interesting patterns and trends in the Northern Star’s reporting over time.

Topics: Charter, Chartist, Chartism, Petition, Corn Law, Poor Law
It is no great surprise that some of the most commonly used words in the Northern Star between 1838 and 1852 were Charter and Chartist, each of which appears some 15,000 times during those 15 years. Since there were some 780 editions of the paper over that period (52 issues a year for 15 years), each word appeared, on average, around 20 times a week in its pages.

The word Chartism, by contrast, appears significantly less often. Although the Chartist movement is closely associated with the petitions it drew up and presented to Parliament, there were also rather fewer mentions of the word “petition”. As can be seen later on, however, these mentions were clustered particularly around the period in which Chartists were actively collecting signatures for the largest petition in 1841 and 1842.

Two other great causes overlapped with Chartism, the campaigns against the corn laws and against the New Poor Law of 1834. While the corn law was a rival and often divisive issue within Chartism, much of the Chartist movement’s strength came from the mass working class support it took over from the anti-poor law campaign in the North of England. As the chart and table below show, however, neither issue filled the pages of the Northern Star in quite the same way as the campaign for the Charter.

* The chart below shows all search results for the period 1838-52 for the selected word.

People: O’Connor, Lovett, Vincent, Frost, O’Connell, Harney, Peel
Feargus O’Connor was already a public figure in his own right by 1838, and as both the owner of the Northern Star and the leading Chartist personality of the period, it was inevitable that his name would appear more than any other in the paper’s columns.

Even so, the extent to which the number of mentions of O’Connor (some 14,703 in 15 years) outstrips appearances by any other individual is remarkable. With O’Connor appearing in the pages of his own paper as often as the Charter itself, it is little wonder that he became so associated with the Chartist cause.

Others who appeared frequently in the pages of the Northern Star included Sir Robert Peel, who was prime minister in the crucial period from 1841 to 1846, and Daniel O’Connell, the Irish nationalist leader who had signed the original Charter in 1837 but swiftly became an opponent of Chartism and of O’Connor.

O’Connor’s fellow Chartists appear to have merited fewer mentions in the Northern Star. John Frost, who became a Chartist “martyr” when he was deported to Australiaafter leading the Newport rebellion of 1839, managed to achieve more coverage than most, with George Jullian Harney, O’Connor’s long-time ally and editor of the Northern Star from 1845-49 also doing well.

However, both the great Chartist orator Henry Vincent and the author of the Charter itself, William Lovett, are notable by their absence. Both men were highly critical of O’Connor after 1840.

* The chart below shows all search results for the period 1838-52 for the individual surname.

Note: the search does not support apostrophes, so results for O’Connor and O’Connell were based on searches for Connor and Connell. 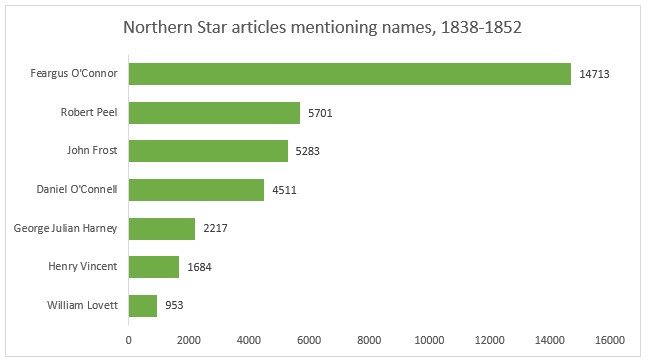 Changing interests of the Northern Star

Petitions
There were three main Chartist petitions, presented to Parliament in 1839, 1842 and 1848, along with a further large petition seeking clemency for Chartist prisoners in 1841 and two much smaller efforts in 1849 and 1852.

What is most notable from the chart below, however, is how relatively few mentions of the petition there were in 1838 and 1839. Only in the second phase of Chartism, during 1841 and 1842, did the Northern Star really devote space to the Chartist petitions, averaging 40 mentions in each week’s issue.

After then declining as a topic for the paper, petitioning once again began to become a prominent issue from 1846 – the word “petition” appearing in more articles that year than it did in 1848, when the third of the great petitions was presented.

* The chart below shows all search results, by year, for the word “petition”. 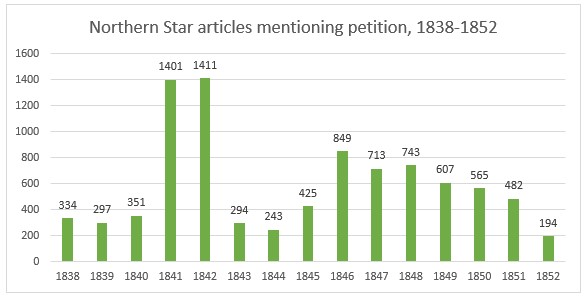 Land
The question of land ownership was not raised in the six points of the Charter and played hardly any role in the first phase of Chartism. By the mid 1840s, however, Feargus O’Connor had become interested in the issue, and developed a land plan aimed at resettling Chartists on smallholdings set in land colonies.

Although O’Connor only began to write in a focused way on this issue from 1843 onwards, when his Letters to the Producers of Wealth suggested that 20,000 acres would support 5,000 families in self-contained communities with their own schools, libraries and hospitals, the chart and table below show that there were a substantial number of mentions of land issues in both 1841 and 1842.

The land plan really took off in 1845, when the first national conference devoted to the issue took place. Although not universally popular among Chartists (some of whom saw it as a distraction from Chartism), O’Connor used the Northern Star to campaign on the issue to the virtual exclusion of all else.

The first estate, at Heronsgate in Hertfordshire, opened in 1848, by which time the management and finances of the scheme were being questioned by a parliamentary inquiry. Found to have no legal status, the Chartist land company and its cause went into decline; the last land conference was held in August 1849. On 9 July 1850, a petition to wind up the company was presented to Parliament.

* The chart below shows all search results, by year, for the word “land”. 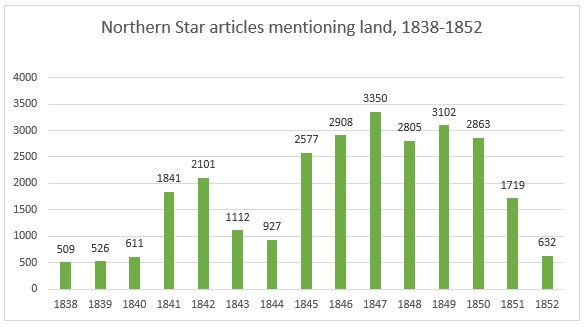 Temperance
There was a strong strand of teetotal and temperance thinking within Chartism. The Chartist orator and organiser Henry Vincent had abstained from alcohol since 1836. Early in 1840 a number of “Teetotal Chartist Societies” were formed, and on his release from prison later that year, William Lovett began to emphasise the importance of temperance in his New Move Chartism.

This upsurge of interest can be seen in the chart and table below. However, with the rift between Lovett and the Northern Star’s owner, Feargus O’Connor, growing, Lovett and his causes began to be edged out of the paper. O’Connor was also an opponent of teetotal Chartism, not because he opposed the temperance movement but because he feared that it would prove divisive by suggesting that the vote was not a right but something to be earned by those able to demonstrate their moral fibre.

Although the temperance cause was edged out of the Northern Star after 1842, it re-emerged as the political cause of Chartism languished in the years before the third petition and the revival of 1848.

* The chart below shows all search results, by year, for the word “temperance”. 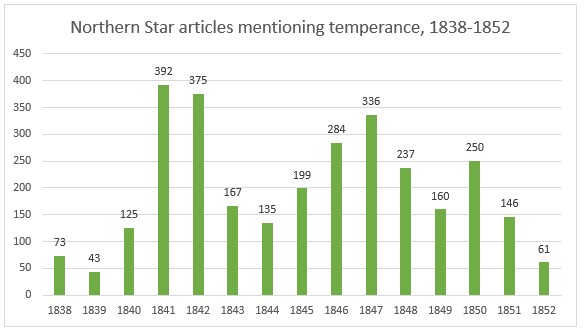 Feargus O’Connor
Having already served as an Irish MP from 1833-35, Feargus O’Connor was an established radical politician by the time he became the proprietor of the Northern Star. The paper, and his adoption of the Chartist cause, turned him into a household name.

However, as the chart below shows, it would not be until 1841 that the paper became a vehicle for the cause of O’Connor himself. That year – most of which he spent in prison – and during the campaign for the second petition in 1842, O’Connor’s name appeared on average 50 times in each issue.

Though this would fall back in successive years, rising again only as, first, the land campaign and, second, the third Charter gained attention, O’Connor’s name never quite dominated the paper in the same way again. Mentions of him would later drop considerably as he became ill and later sold the paper in 1852.

William Lovett
As the author of the People’s Charter and secretary to the First Convention of 1839, William Lovett was one of the most significant figures in Chartism and in radicalism more generally.

However, Lovett and the Northern Star’s proprietor, Feargus O’Connor, had never been close. They had fallen out over their response to the arrest of a group of Glasgow spinners for their trade union activities in 1837, and would represent different strands of thought within Chartism.

Though the Northern Star could hardly ignore the Convention’s secretary or his trial and imprisonment in 1839, it appears to have done its best. Only in 1841, when the rift between O’Connor and Lovett became an open conflict, did it devote any great space to Lovett and his views – and then mostly to rubbish them.

Although Lovett merited little coverage in the Northern Star during the early days of Chartism, with O’Connor in prison during much of 1841, he became a more significant figure in the national movement, with correspondingly more coverage in the Star.

Harney edited the Northern Star from 1845 to 1849, during which time he also began to appear more frequently in the paper’s pages as a leading figure within Chartism. In particular, Harney pushed for greater involvement with the European left and radical emigres based in London. His own paper, the Red Republican, would later publish the first English translation of Marx and Engels’ Communist Manifesto.

In March 1852, O’Connor sold the Northern Star to its then editor, G A Fleming, who sold it on in turn to Harney the following month. The paper lasted only to the end of the year.

Download data and charts used on this page: Northern Star in data

Leeds convention, 1846 – gearing up for a general election