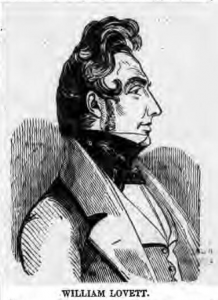 William Lovett was secretary to the General Convention of the Industrious Classes (the First Chartist Convention), and one of 12 delegates whose portrait (left) was drawn for The Charter, newspaper of the London Working Men’s Association.

Born in Newlyn, Cornwall, William Lovett moved to London as a young man and became involved in the anti-militia movement, trade unionism and the campaign to repeal taxes on newspapers.

In 1836, he helped found the LWMA. This organisation would originate the People’s Charter (with Lovett writing the main draft), based on a well-established series of radical demands.

Coupled with the petition originated by the Birmingham Political Union, and the mass support provided by opponents of the New Poor Law and industrial workers in the North of England, this proved to be the basis of the mass Chartist movement.

Lovett became secretary to the General Convention of the Industrious Classes when it met in London in February 1839 and continued in that role when it relocated to Birmingham following Parliament’s rejection of the petition. He was arrested and found guilty of seditious libel for publishing the Convention’s declarations and imprisoned at Warwick for a year.

While in prison, he co-authored Chartism: A New Organisation of the People, which became the basis of “knowledge Chartism” or the “New Move”. After falling out with Feargus O’Connor and the National Charter Association, he largely ceased to play an active role in Chartism, devoting himself to working class education.

Portraits of Delegates No. 3: William Lovett

The subject of our present sketch furnishes, in his own person, a striking and encouraging example of the pursuit of knowledge under difficulties, and of the moral eminence which may be attained in society, by decision and honesty of purpose. William Lovett was born in the little fishing village of Newlyn, near Penzance, in the county of Cornwall; and he owed but little to the world or the world’s friendship, in early life. The instruction which he received fell far short of introducing him to an acquaintance with the rudest elements of knowledge. At an early age he was apprenticed to a ropemaker; and when he had completed the term of his servitude, he found himself thrown upon his own resources, without the means of obtaining a command over even a scanty supply of the necessaries of life. The chances of obtaining employment in his native village being few and precarious, he resolved to set out in pursuit of Fortune elsewhere; but the want of funds and the absence of friends rendered it extremely difficult to carry his resolution into effect. The difficulties with which he felt himself pressed, instead of subduing his energy, however, incited him to exertion, and his ingenuity speedily put him upon a tact, which not only served his immediate purpose, but determined, in all probability, his future character. During the term of his apprenticeship, he had acquired some little skill in putting together petty articles of cabinet work; this skill he now turned to account, and at length found himself the absolute master of the sum of two pounds. With this fortune in hand, and an unbroken spirit, he started for London –

“The world before him–where to find a home.”

Of Mr Lovett’s personal character, we have left ourselves but little room to speak. But this is not matter for regret. The sketch we have given of his career, will have already indicated “what manner of man he is” in spirit; and not less, what is the stature of his mind. We know of few mem who unite in themselves so much of the stern resolve of the Radical with the unobtrusiveness and courtesy of the gentleman. He is pre-eminently a man of “a meek and quiet spirit,” and his earnestness and inflexibility of purpose are never evinced in an offensive or overbearing manner. He is essentially an honest man. He will never pander to the prejudices of any, for the sake of temporary popularity. He has thought long and deeply upon political subjects; and he has determined upon his course. From that he is not to be turned aside, by either the love of gain or the menacing of loss. He will not consent to compromise his principles or his opinions, whenever he thinks it is his duty to express them; and although he may sometimes encounter hostility, the obvious honesty of his purpose, and the sterling integrity of his character, extort from those who differ the most widely from him, testimonies of esteem and respect. We have already incidentally spoken of Mr Lovett’s acquirements. He is a man of much and varied information; and some of the tracts published by the Working Men’s Association, give favourable evidence of his capabilities. The People’s Charter, which originated in that Association, was in a considerable degree, the offspring of his mind. He is diffident and distrustful of his own powers, however, and evidently takes up his pen with much reluctance. As a speaker, Mr Lovett is only great upon great occasions. He is by no means fond of public speaking. He never opens his lips, unless he has something to say; and he gives evidence that he would sooner hear others supply what he deems to be lacking in a discussion, than supply it himself. In the Convention, he speaks but seldom, and then briefly and to the point, and without any display. His voice is full and flexible, and we have sometimes heard him rise to the full height of impassioned oratory and eloquent declamation.

Mr Lovett is nearly forty years of age. His features are angular, and the expression of his countenance intelligent; albeit there is little indication of that restless activity which is the great characteristic of his mind. His frame is slightly built, and his height about six feet; but he as a somewhat stooping gait, which renders his stature apparently less than it really is. In closing this our imperfect sketch of the Secretary of the Convention, we take leave to say, that he is one of whom the working classes have reason to be proud; and we know of no man who enjoys a larger measure of their respect and confidence.

* We regret to say, that, in consequence of an accident which has occurred to our engraving, we are unable to give the portrait of Mr Lovett, as an accompaniment to the above sketch. We must, therefore, crave our readers’ indulgence until next week, when we shall present them with two portraits.