From Chartism to the London School Board. 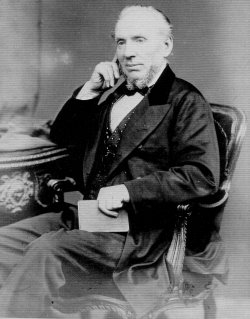 The life of Benjamin Lucraft provides a fascinating link between the later Chartist movement and subsequent working class political agitation – through the Reform League of the 1860s and the International Working Men’s Association (or First International) to the emergence of Lib-Lab politics at the end of the century.

The account of his life set out below is taken from the Lucraft One-Name Study website with the kind permission of Ian Lucraft.

The Chartist years
Benjamin Lucraft is thought to have joined the Chartists around 1848, and was present at the historic meeting of the Chartists on Kennington Common on 10 April 1848. He was active in Richard Cobden’s Parliamentary and Financial Reform Association, and became the secretary, and most prominent member of the North London Political Union. He spoke around London for the Wheatsheaf Temperance Society. Ben shared the chair at the last Chartist Conference in London in 1858, out of which emerged the Reform League, with a programme of manhood suffrage, a ballot for elections to parliament, triennial parliaments, equal electoral districts, and the abolition of property qualifications for people to vote.

Though we don’t know his trade union affiliations, he was one of those who helped impress on the craft unions the need not just for activity over wages and conditions, but, as he said in a letter he wrote to the Reynolds’s Newspaper in 1861: “I should hope that the operative builders are by this time convinced that political power has something to do with the social conditions of the people.”

The First International
Ben was at the inaugural meeting of what became known as the First International or International Working Men’s Association. The meeting was described by Karl Marx, who was there, in a famous letter to Friedrich Engels dated 4 November 1864. Ben was elected to the committee, and played an active part in its work, sometimes chairing its meetings.

The International worked to support fledgling working-class organisations round the world, and Ben is a signatory to many of its letters and declarations. He travelled to Geneva in 1866 for the London Trades Council, and to the Brussels Congress in 1868, and the Basle Conference in 1869 for the IWMA, where radical political groups from all round Europe were present.

Agitation for reform
By the mid 1860s sections of the working class were fed up with the lack of constitutional change, and Ben, who had been leading weekly marches and demonstrations in Clerkenwell, and Shoreditch, escalated the action with marches into central London, to Trafalgar Square. They had a wagon for a platform, a band to lead the singing, and a banner for the men from Clerkenwell.

The Times thundered against these “unwashed” people who came to demonstrate in “our Square”. If they wanted to demonstrate they should do so in their own part of town, the Times leader writer suggested.

On the evening of 27 June 1866, Ben led 1,000 demonstrators to the West End , where an estimated 10,000 had already assembled. The pressure for reform became so great, that the more moderate Reform League had to take account of the strength of feeling, and took over the organisation of the next demonstration, attended by an estimated 80,000 people. They decided to hold an even bigger rally in Hyde Park on 23 July. The Metropolitan Police Commissioner banned the demonstration but most people ignored the prohibition.

The workers forced their way through the police cordons, to a noisy rally, where some of the park railings were pushed over. This became known in the press as “The Hyde Park Riot”. The next year more demonstrations were banned, this time by Spencer Walpole, the Home Secretary, but then allowed to proceed, because of the very large numbers that gathered, in spite of the thousands of police and troops on duty.

The Home Secretary resigned, and Disraeli’s government subsequently piloted the Reform Act 1867 through Parliament, allowing a greatly increased number of working men the vote. The Illustrated London News said when the people had invaded Hyde Park , that some of it was being reserved “as a lounge for some fashionable people”.

The ultra-radical years
Ben was in the ultra-radical ranks in these years. When he went to Basle he argued not only for land nationalisation, but for the large-scale cultivation of the land by the state on behalf of the people. Here were the early hints of collectivisation. He explained that as he travelled by train through France , he saw the fragmentation of the land into tiny plots that had followed the French Revolution; a fragmentation which had made profitability for the people so difficult. These opinions were described as “scandalous” when reported in the British press.

He took part in the sensitive debates on Fenianism and Irish Home Rule, in 1867, arguing that the Irish “were fully justified in using physical force to redress their wrongs”. The press condemned Ben and others, for these views, and for letters about the war in France, in 1871, and Ben resigned from the IWMA.

He joined the Land and Labour League in 1869, as the most radical organisation in Britain , and served on its council. He was one of the founder members of John Stuart Mill’s Land Tenure Reform Association, urging state control of land in 1870.

Education Issue
Ben’s interest in education had sprung out of his passion for reform of the apprentice system. Perhaps he had seen its effects. He certainly saw its product when he went to Paris in 1871 for the Royal Society of Arts, to report for them on the state of continental furniture making.

In his report he proposed a new system of technical education, and these ideas eventually became part of the Technical School system years later. He was particularly concerned that draughtsmanship be included in the syllabus for craft training.

Ben had been one of the promoters of the first Working Men’s Exhibition in the Agricultural Hall in 1865, and he went on to promote the idea of a school or college for the furniture trade. Such a school was founded, and still flourishes in Shoreditch. He also proposed a museum of East London craft work, skills and tools.

In 1870 he was selected to stand for election for the new London School Board, which set up the Board Schools after Forster’s Education Act. He was the only “working man” to be elected, and the election party was in the Hole in the Wall, in Hatton Garden .

London School Board
On the Board, Ben fought for many issues. He opposed the office of paid chairmen; he opposed the use of the cane; he always argued for free education; he was vigorous against military drill for children in the Board Schools; he was chair of the committee which investigated the misappropriation of historic charities by the wealthy public schools; he was early in demanding compulsory education for all, and the removal of fees.

He was re-elected every three years until he retired in 1890, aged 80, as the longest serving member.

A large painting of the whole School Board was done in 1873, and Ben is standing with his friend the radical journalist Thomas Bywater Smithies, another board member. The painting hung for many years behind the desk of the leader of the Inner London School Board, in County Hall, on the South Bank. Its present location is not known, but a photo of it exists.

Peace and other issues
Ben was active in a range of radical causes. These included total abstinence, the Working Men’s Club and Institute Union, the Workman’s Peace Association, of which he was for nine years the chairman, and for whom he went to Paris and other conferences.

He stood unsuccessfully for Parliament in Tower Hamlets, as one of the first Liberal-Labour candidates.

More controversial was his active support of Josephine Butler in the Working Men’s National League for the Repeal of the Contagious Diseases Acts. These acts gave the authorities powers to discriminate against women with sexually transmitted diseases, and caused great distress particularly among the poorer women of the urban areas. Ben described the acts as “the very worst class of party legislation”, saying to working men, who were mostly too embarrassed to discuss such things: “It is your sisters, your daughters, that these acts are to entrap – to make use of. Not only for the army, not only for the common soldiers, but for the officers and gentlemen.”

Woodwork and his last years
He kept at his trade of chair-carver into his 80s contentedly working for his son, George, in the company that ran through into the 20th century. Only two chairs are known still to exist. One is in the possession of a descendant, and the other was the chair he was asked to make by the Liberal Party when it wanted to make a gift to William Gladstone. This chair was re-discovered, and a great great grandson, Jack Edmonds Lucraft, generously paid for it to be restored. It is in Gladstone ‘s home at Hawarden. The irony is that the chair was made by the man who in the 1860s had been called “a cabinet breaker, rather than a cabinet maker” in the House of Commons.

Ben died at his home, 18 Green Lanes, at Newington Green, London , which still stands, on 25th September 1897. The funeral oration was recorded in the local paper, in which the Rev J Ellis, of Barnsbury Chapel, spoke of a man “who while working for the generations through which he lived, had brought benefits that future generations would enjoy.” Ben was buried in Abney Park cemetery, and his grave can still be seen.

A large number of relatives, friends and former colleagues were present, including a representative from way back in Broadclyst. Natural flowers were placed on the polished coffin, and Mr Ellis quoted Longfellow’s Psalm of Life:

The lives of all great men remind us,
We should make our lives sublime,
And departing leave behind us,
Footprints on the sands of time.