The Chartist leader Ernest Jones died of pleurisy on 26 January, 1869, six days after addressing his last political rally, at Chorlton Town Hall. Up to 100,000 people lined the streets of Manchester for the funeral. 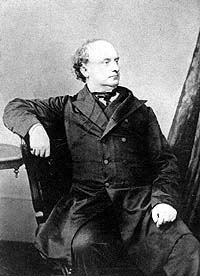 Having led Chartism’s left wing after 1848, and subsequently all that remained of the movement, he had in later life joined the Radical wing of the Liberal Party, and was widely expected to win a seat in Parliament in the general election then under way. His son, Llewellyn Atherley-Jones KC (born 1851), became a well-known barrister and Liberal MP.

The funeral has been called the last great Chartist gathering. The ceremony was public and many thousands of people, probably between 80,000 and 100,000, crowded the streets as the procession, which started from his house in Wellington Street, Higher Broughton went along Bury New Road , through Strangeways, along Market Street and London Road to Ardwick Cemetery.

Many shopkeepers along the route closed their doors out of respect and as the demonstration gathered strength friends and political supporters increased the numbers. Four old Chartists, veterans of the Peterloo Massacre led the procession. They were followed by Mr Higham’s brass band playing the DEAD MARCH from SAUL. About fifteen hundred people followed in ranks of six abreast and they were doubled as the demonstration passed the Assize Courts and the Royal Infirmary.

Among those in the carriages were the Executive Committee of both the Liberal Party and the Reform League. There were also many private carriages in one of which was Thomas Topping who had been in prison with Ernest Jones in 1848. At the cemetery, Edmund Beales delivered the Address. He said that Ernest Jones combined “the erudition of a scholar, the genius of the poet, the fervent eloquence of the orator and the courageous and fervent spirit of the undaunted patriot who no persecution could frighten from the advocacy of his principles, whilst no temptation or threatened loss of fortune could tempt him to betray them.”

Jones died poor. After his funeral, his friends decided to launch an appeal to raise funds to support his widow and three children. Meetings were held in and around Manchester and an advertisement was inserted in Punch. In Halifax where he had been parliamentary candidate in 1847 and had a large following, a committee was set up to raise funds. John Snowden commented that they did “exceedingly well in Halifax”. Benjamin Wilson of Salterhebble reported that he had raised between £13 and £14 pounds from 40 subscribers – all working men. By the time the fund was closed in April 1871, it stood at £2,942.

At the same time, the memorial over his grave in Ardwick Cemetery was unveiled. A contemporary description read,

” The monument was twelve feet high and was composed of three large blocks of granite each four feet six inches by twelve inches. The blocks are surmounted by a slab of red polished granite with base and cap moulds on which is placed a block of grey stone, with panelled sides ornamented with the rose, thistle and shamrock. The corner pillers are of red granite, with curved caps, upon which is laid another slab of red polished granite; surmounting this are two blocks of grey stone, the whole terminating with a draped funeral urn. On the left-handside panel is the following inscription:-

Erected by public subscription to the memory of Ernest Jones, patriot, poet; born at Berlin 27 January 1819; died at Manchester 26 January, 1869.

Immediately below runs the epitaph:

Full of warm sympathies and generous desires, he freely toiled and suffered on behalf of the wronged and oppressed, and made himself honoured and beloved by the people whose welfare he sought throughout life, and in whose service he met an untimely death.

The front panel simply bears ERNEST JONES while below is an extract from his reply to Professor Blackie in DEMOCRACY VINDICATED:

We say to you whatsoever ye would that men should do to ye, do ye even so to them – when you realise this, you have democracy, for democracy is but Christianity applied to the politics of our worldly life.

The work was executed by Mr Peter Spence of Ardwick at a cost of one hundred pounds and it was favourable commented on by all.”

The unveiling ceremony was performed by Rev S A Steinthal who said that principles last forever. Those gathered around the monument had come to testify that they still clung to the principles of which Ernest Jones had been so noble an exponent. Elijah Dixon added that he had never known a man whose “talents and position were so freely and distinctly sacrificed for the public good”.

Over 40 years later when the Trades Union Congress met in Manchester, a further ceremony took place in Ardwick Cemetery. Manchester and Salford Trades and Labour Council had arranged for the monument to be renovated. At their invitation, large numbers of Congress delegates assembled on Saturday afternoon, 31 August, 1913 for a rededication ceremony. An additional inscription had been added

Whoso fadeth and dieth,
Yet his deed shall still prevail.

This memorial to Ernest Jones was restored
and renovated by Manchester and Salford Trades
and Labour Council and was unveiled and dedicated
to his memory, yesterday (31 August, 1913)

The unveiling ceremony was performed by TUC president W J Davis, who thanked the trades council for having given him the opportunity of honouring the memory of a great champion of the people. However, the memorial was forgotten except for a few enthusiasts who visited the cemetery from time to time. In 1960, when the area was converted into a playing field for the use of Nichols School, in spite of the efforts of the Antiquarian Society and others, the monument was destroyed.