This page explores the story of The Charter, a newspaper launched by London Chartists in 1839 which survived for 60 issues before financial problems and political disagreements destroyed it. 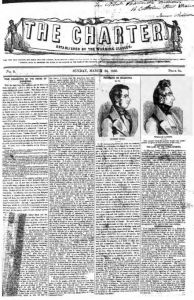 The Charter was, as its masthead declared throughout the 14 months of its existence, “established by the working classes”, and aimed to provide both a sympathetic newspaper for its working class readers and a steady supply of funds for working class causes.

More accurately, it was established by Robert Hartwell, a compositor, secretary to the Dorchester Labourers Fund (which campaigned on behalf of the Tolpuddle Martyrs) and one of the founding members of the London Working Men’s Association, who made himself the new weekly paper’s publisher and drew in a collection of working men to form its management committee.

Also involved was William Lovett, who added the role of secretary to The Charter’s management committee to his existing position as secretary at the LWMA, providing it with a solid link to organised Chartism in the capital. Under their guidance, the paper was less confrontational in its tone than the rival Northern Star, and can be seen as largely reflecting the “moral force” radicalism of London Chartism at the time.

Despite this, the paper was not universally popular within the Chartist ranks – or even among London’s radical artisans. Lovett’s own mentor, Francis Place, declared the paper “a poor thing”, regarding it as anti-middle class in tone – a stance he feared would alienate allies and supporters. Place quoted to Hartwell the views of a number of middle class radicals who had stopped taking it, “ because it abused and held out the middle classes as little better than monsters”.

Place was especially critical of the new paper’s editor, William Carpenter, who he claimed had originated the idea for its publication and had then persuaded the LWMA to support it. Place alleged that Carpenter was

“a particularly ill qualified man for his office, he had been a journeyman tradesman, then a sectarian preacher, was then employed upon a newspaper, and succesively [ sic ], on several others, every one of which he assisted to destroy”.

In fact, though he had enjoyed a chequered career, Carpenter did come to The Charter with quite a record in radical politics. In 1830, he had launched the first of the unstamped papers, launching a campaign that would later be taken up by Henry Hetherington, and served six months in prison.

Carpenter continued to publish political tracts and was active in supporting the Reform Act of 1832. He also served as a delegate to the General Convention of the Industrious Classes (the Chartist Convention), where he represented Bolton and opposed Feargus O’Connor, taking a more moderate stance on issues such as the call for a general strike to enforce the charter.

The Charter set out its objectives in its launch issue (The Charter, 27 January 1839). These were

“to secure for the working classes a weekly newspaper, equal in size and in no degree inferior in its literary and mechanical features to any journal now extant”, and “to constitute out of the profits, derivable from such a paper, a fund available for any object which shall be deemed promotive of the individual or collective interests of that class for whose special benefit the paper is proposed to be established”.

Throughout its life, The Charter offered readers a diet of Chartist news, salacious stories of murders and robberies, a little high politics and gossip about the upper classes, and theatrical and book reviews. It may also have been the first newspaper to offer its readers a column
specifically aimed at children.

In addition, The Charter’s adoption by the Chartist Convention as its official organ should have helped to boost circulation among a readership anxious for news of their delegates’ contributions.

Hartwell would later claim that the paper had been launched with a circulation of 6,000, which should have given it a profit of £20 a week (The Charter, 15 March 1840). However, unlike Feargus O’Connor’s more lucrative and politically influential Northern Star, The Charter survived only a relatively short time and was not a great success. With hindsight, the reasons for its failure are more obvious than they would then have been to Hartwell and Carpenter:
• The Charter failed to engage its readers, and consequently lacked the steady flow of local news contributed by the network of agents and paid reporters who turned the Northern Star into a detailed record of Chartism on the ground;
• Neither Hartwell nor Lovett used the paper to turn themselves into a public figure as O’Connor did at the Northern Star, holding forth on the front page of every issue with a stream of rhetoric and advice to his readers;
• The Charter did not attract the advertising which would have boosted its revenues and enabled it to subsidise its cover price of 6d (sixpence) a copy, unlike the Northern Star, which at least at first carried a large volume of adverts and charged 41⁄2d; and
• Even The Charter’s attempt to provide a visual record of Chartism’s leading figures, in the form of a series of woodcuts and profiles of delegates to the Convention, was overshadowed by the more sophisticated engravings given away by the Northern Star.

Despite Hartwell’s hopes that the paper would turn a profit, it actually made a loss of £40 each week. Francis Place calculated that while the publishers expected to sell 10,000 copies a week and needed to sell 7,000 to break even, they did not in practice exceed sales of 5,000. By November 1839, on Hartwell’s own admission, the paper sold no more than 2,300 to 2,500 copies a week.

Both Place and Hartwell placed much of the blame for the paper’s failure on Carpenter, who was given £30 a week with which to fill The Charter’s 16 pages. Place claimed of Carpenter:

“He never employed any able man, but got the paper up any how he could and pocketed the money.”

Hartwell also cited a series of run-ins with the paper’s own compositors, who took exception to the management committee’s practice of withholding their weekly pay when cash was tight and who on one occasion took their publisher to court for non-payment of wages.

By the time of the paper’s collapse, however, its founding editor had already quit. Carpenter left after some 40 issues to join James Bronterre O’Brien’s new Brighton-based Southern Star for its first issue in January 1840.

As The Charter’s final issue approached, Hartwell and the management committee announced that they would be transferring editorial control to another radical paper, The Statesman, and urged readers to switch their allegiance to it once The Charter closed. In fact, the paper’s final issues consisted of the contents of that week’s Statesman but for a different front page.

Carpenter was furious at Hartwell’s decision to endorse the Statesman rather than the Southern Star and at an attack by the management committee on his earlier editorship of The Charter. Writing in the Southern Star Carpenter implicitly blamed Hartwell for the paper’s problems, alleging that they had arisen in areas over which had no control.

After 1840, Carpenter drifted away from radical politics, but remained active in paid journalism, contributing to a range of periodicals and encyclopaedic works.

As to Hartwell, he would go on to the main contributor to pro-trade union publication The Bee-Hive, set up in 1861 by George Potter. Although the paper was adopted by the London Trades Council, its leaders thought The Bee-Hive was over-enthusiastic in its support for strikes. The paper never sold well and left its owner in such debt that he eventually sold it.