Chartists met anywhere they were welcome, from beer-houses to dissenting chapels. But often they and other working class radical groups were excluded from existing venues and had to create their own spaces.

In Protest and the Politics of Space and Place, Dr Katrina Navickas recounts how not just Chartists but Owenite socialists, trade unionists and other social movements of the 1830s and 1840s were able to take meeting rooms and other buildings for their own use on a long-term basis.

As she puts it: “With greater longevity and funding than their predecessors, radicals were able to move beyond ‘spaces of making do’.”

Outside London this often meant Chartists and others were able to build their meeting place from scratch. In the square mile of the City of London, its streets already crowded, this was not an option – and may have proved beyond Chartism’s resources. But the approach was the same.

In the spring of 1841, the City of London Chartists took out a lease on rooms at 55 Old Bailey.

At the time, preparations were under way to organise the presentation of a great petition to Parliament calling for a pardon for imprisoned Chartists, and the movement needed a venue for a “Victim Restoration and Charter Convention” which would oversee the arrangements.

But the building would go on to become a hub of Chartist activity, hosting regular meetings, lectures, and delegate conferences for the whole of London and Middlesex. It also served as an office and correspondence address for the National Charter Association – and as a venue for social events.

It would also host meetings of other radical and working class organisations. The “Scientific and Political Institute” which ran the venue was managed by a committee which stood at least to some extent apart from the Chartist body.

Today the name Old Bailey is synonymous with the central criminal court, although it is in fact the name of the street on which it stands. A smaller but equally well known court house was there in the 1840s, next door to Newgate Gaol and the venue for public hangings. 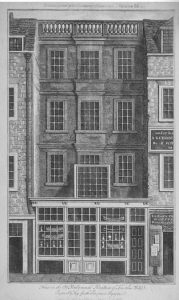 Number 55, it seems from a number of reports, was immediately opposite the court house, where a glass office block stands today. It was also reportedly the former home of the notorious 18th century underworld figure Jonathan Wild. If this is true, then the picture here may show the building.

By 1841, the property had gone through a number of changes. For the most part it had been a salesroom, with one advert from George IV’s time proclaiming: “Coronation!!! 20 to 30,000 ILLUMINATION LAMPS” for sale (Public Ledger 16 July 1821).

But the final tenant before the Chartists moved in was a Mr Pett, who wrote letters (“secrecy strictly observed”), petitions, wills and legal documents “on moderate terms”. “Mrs P attends to Females’ letters of correspondence, &c. Advice to tenants gratis.” (Morning Advertiser, 6 August 1839).

The advertisement that caught the eye of someone in the City of London Charter Association must, however, have been that which ran in the Morning Advertiser a couple of years later, on 6 March 1841.

It read:
“CITY – No. 55, OLD BAILEY. To be LET, a spacious FIRST-FLOOR, good light and wide staircace (sic), with every convenience, suitable for offices, ware-rooms, or manufactories – front room, thirty-five by nineteen; back, nineteen by sixteen. May be had together or separate. Unfurnished.”

If the dimensions are accurate, the larger of the two rooms was around a quarter of the size of a doubles tennis court – big enough for a public meeting, but hardly capable of hosting a rally.

The City of London Chartists had previously met at the Dispatch Coffee Rooms in Bride Lane just off Fleet Street. But now they had rooms of their own.

By the beginning of May, the Chartists had moved in, with Morgan Williams, secretary pro tem to the Victim Restoration and Charter Convention urging the working men of England, Scotland Wales to forward their petitions to the meeting at 55 Old Bailey (Northern Star, 8 May 1841).

The “place of meeting” procured by the City of London Chartists was, the Star reported, “well furnished, with a platform, seats, &c &c” (Northern Star, 15 May 1841), and was being put to good use, with lectures delivered “twice on Sunday, besides other evenings” (Northern Star, 5 June 1841).

The national convention proved to be a great success. Peter Murray McDouall reported how on the morning of 25 May 1841, when the number of signatures was counted and proclaimed to be 1,300,000, “the cheers resounded through the Old Bailey, and rolled away in its granite recesses”.

A team of stonemasons “attired in clean white fustian jackets” was brought in to load the giant petition rolls onto a wooden hurdle and carry it off to Parliament. “Our little room, 55 Old Bailey, was crowded to suffocation, and the street blocked up,” declared McDouall.

That summer, the Scientific and Political Institute which would manage the hall held a special general meeting of its shareholders, “when rules for their future guidance was agreed upon, and a managing committee for the succeeding quarter was elected” (Northern Star, 24 July 1841).

Out of 50 shareholders, it was announced, 24 regularly took the Northern Star every week, while Henry Vincent’s National Vindicator “and other invaluable vehicles of sound political principles”, also enjoyed good sales, with the profits going towards the expenses of the institute.

Giving an indication of the range of activities taking place, the report also said that members of the public could call in to buy radical newspapers on a Sunday morning, that Chartist sermons were being preached there of a Sunday evening, and that a social concert was planned for the Monday to defray the cost of the London general election committee.

The following week, the Northern Star was even able to report the setting up of a female Chartist Association, with the promise that it would meet at 55 Old Bailey every Thursday evening (31 July 1841). Events were also held to try to launch a youth section (25 September 1841).

There is good evidence that the Scientific and Political Institute was not synonymous with the City of London Charter Association. In September 1841, the Chartists were soundly ticked off by their landlords for allowing a sermon to be preached attacking those associated with the New Move.

Even a Young Men’s Anti-Monopoly Association held its first meeting there to protest at prime minister Sir Robert Peel’s plans to introduce an income tax to make up his budget deficit (Hertford Mercury and Reformer, 2 April 1842).

But the rooms were not solely for Sunday sermons, earnest political discussions and the passing of resolutions. A report from the London Evening Standard 28 December 1842), though hostile in tone, gives a flavour of the social activities in the hall – on this occasion a Boxing Day celebration:

“CHARTIST RECREATIONS: On Monday night the Chartists assembled in their Hall, No. 55 Old Bailye, not for the purpose of listening to the ‘sweet voice’ of Miss Mary Ann Walker, not to ‘further the Charter to the utmost of their power,’ but to take part in a concert and ball. The females on this occasion greatly predominated. The concert commenced and consisted of Chartist songs by male and female artistes of the Chartist school; among them was the favourite song (among the Chartists) of ‘O’Connor’s the man of our choice.’ A child about 10 years of age very appropriately sang a song, the burden of which was ‘Oh mother dear, my gentle mother dear!’ Now came the ball. After dancing for some time, a subscription was raised among the gentlemen (?), the ladies strongly protesting at being excluded, and three pennyworth of mistletoe was bought. A Mr Hogg proposed to have the ‘cushion dance,’ upon which a general cry was set up by the females of ‘by all means,’ many of them not knowing what it meant. No cushion being found, a ‘bolster’ was introduced, with which the ‘proposer’ danced until nearly out of breath. The ‘bolster’ was then presented to Miss Susannah Cleopatra Inge, who at the same time received a kiss from Mr Hogg. Miss Inge then danced with the ‘bolster,’ and, having received several Chartist kisses, sat down with the air of an eastern monarch, she being the Queen of the Night, ‘Our Mary Ann’ being left in the shade. The ‘bolster,’ having danced for upwards of an h our, was allowed to retire, as did the other dancers a the peep of dawn, many of them thinking it was better to spend the time in the manner they had done on that occasion than in agitating for the Charter.”

Despite all this, the hall was clearly not much of a money spinner for its landlord. A report of proceedings at the insolvent debtors’ court found John Costello applying to be discharged on sureties (London Evening Standard, 10 October 1842):

“The insolvent was a plumber and glazier, at No. 55, Old Bailey, the first floor of which house he let to a trades union society (the National Charter Hall). He said the furniture belonged to the society, which met two or three times a-week.”

It is not clear when the City of London Chartists gave up the hall, but they were clearly gone by the middle of 1844, when an advert once again appeared in the Morning Advertiser offering the rooms on the first and second floors to let, “the whole newly painted and papered – rent low”.

A new building rose on the site (although not for nearly a decade), and it could not have been more different. Built by the Sunday School Union, the corner-stone was laid by alderman Thomas Challis MP “in the presence of a very respectable audience” (Bell’s Weekly Messenger, 17 December 1855).

The Northern Star in numbers

The People’s Charter Union and the Cause of the People